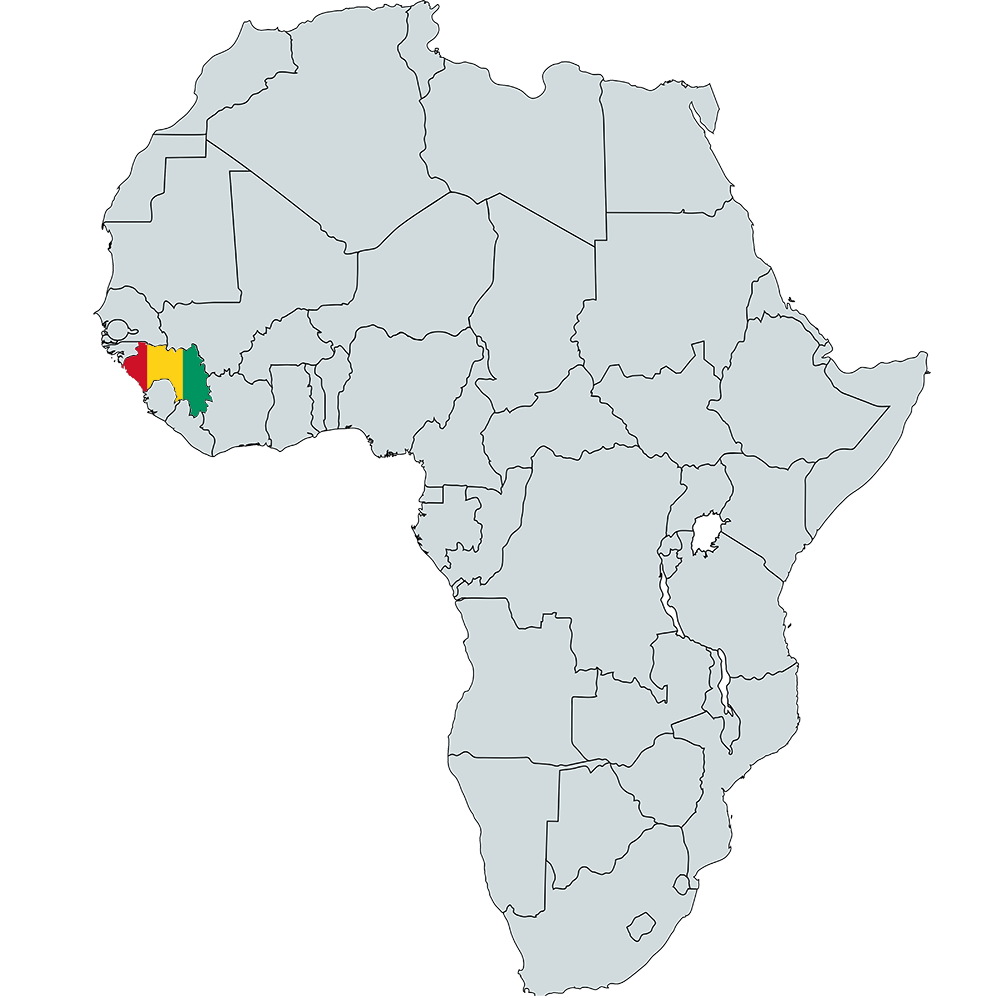 Guinea has some of the world’s largest high-grade bauxite and iron ore reserves, but due to political economy challenges and infrastructure deficits, the country has been unable to fully benefit from its mineral resources. In terms of mineral resources, the country remains largely untapped and compared to other mineral rich African countries Guinea receives less investments in the sector. In 2013 28% of the country’s fiscal revenues came from the mining sector. There are no official ASM production numbers in Guinea, however estimates of diamond exports in 2013 were at 197000 carats valued at 36million according to EITI.
Gold was the first mineral mined in Guinea and reserves are estimated at between 1 000 to 2 000 tones with most deposits located in the Northern side of the country. Diamond’s play a bigger role in the mining sector with an estimated 25 million carats located in the “diamond triangle” (Kérouané, Kissidougou, Macenta). The artisanal diamond sector is particularly governed by customary practices which are not recognised by Guinea’s mining legislation and regulations such as the Mining code. A study of gold mining in Guinea Conakry reveals that the economic value of artisanal gold mining in 2016 was estimated at $300 million. Diamonds in particular are prone to challenges related to management and control in comparison to gold or iron ore. For more than 50years from 1958, diamonds were almost exclusively mined industrially, today diamonds are exclusively produced by artisanal miners.

No indication or provisions regarding women

Issues: lack of positive socio-economic impact of the mining sector and lack of efficient management of environmental and social impacts.

I. The Government will increase geological research;

V. The Government will continue its reform of the judicial, fiscal and institutional environment of the mining sector.

In 2010, The Republic of Guinea entered a new phase of structural reforms as part of a far-reaching plan to remove barriers to the country’s development. Various efforts were made by the Government to reinforce the mining sector’s judicial environment to increase the sector’s socio-economical input. However, those efforts targeted large mining operators which brought on an increased presence of Large Scale Mining (LSM) in the country. The government’s approach is pro-business and thrives for more transparency.

The current mining policy heavily favors medium to LSM, although there are various provisions and mentions of ASM in the mining code and policies. The diamond ASM sector was particularly marked by a series of abrupt changes in terms of the activity’s legality.
Women involvement in the sector is as much as men’s, it is believed that 70% of the active labor in the Eastern region are women. Their activity is concentrated in downstream and labour intensive activities. Repors have called for more attention to be given to women in ASM.

Micro-credit is available to women through the SAG (Société Ashanti Goldfield de Guinée), one of the biggest large scale gold mining company operating in the area. The financing was targeted at women to interest them in performing some other more profitable and sustainable activities such as farming, agriculture or trading.

A partnership related to the Kimberley Process Certification Scheme was approved in 2012. It applies to the diamond value chain but also aims at improving the formalization and economic development of the artisanal mining.