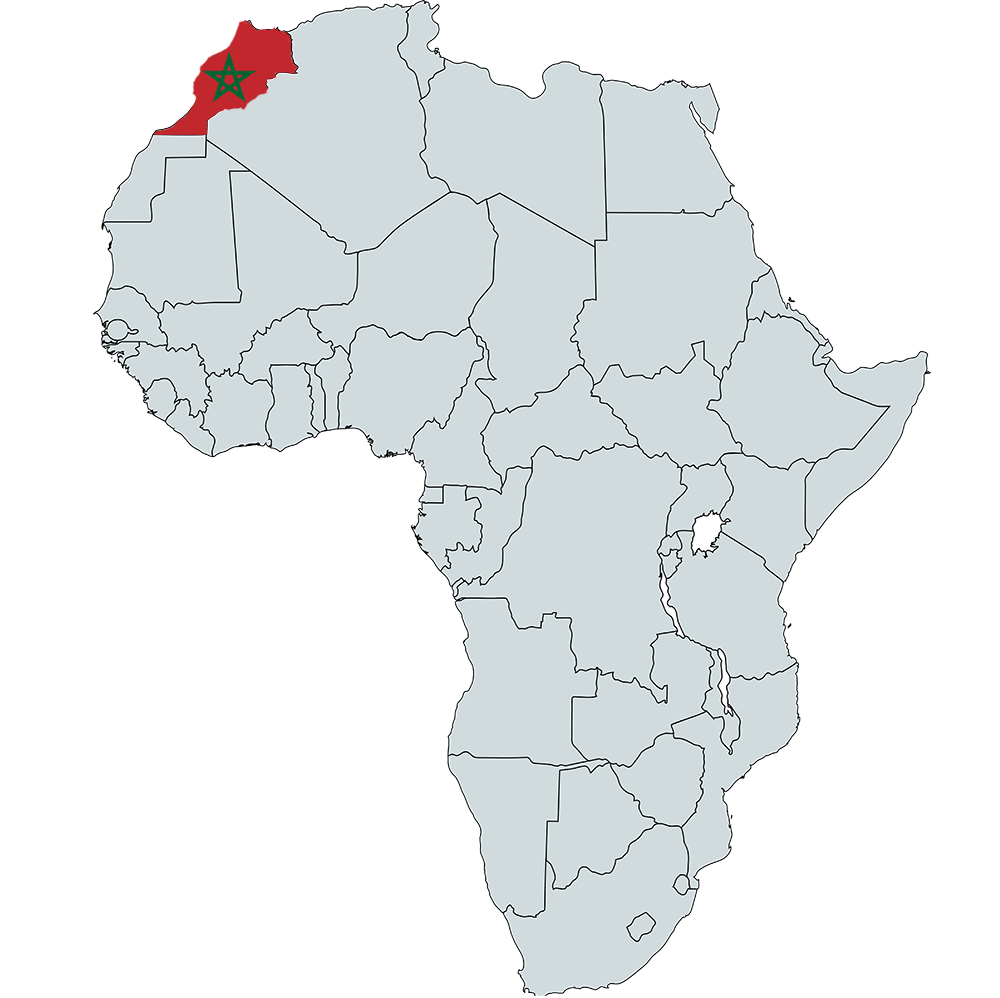 Although Morocco has a long history of mining, an established infrastructure, and a low sovereign risk, its mineral resources remain relatively unexplored compared to many other resource rich African countries. Morocco is host to significant mineral resources, including the largest phosphate deposits in the world, which account for around 77% of global reserves. ASM activities in Morocco include mining of lead, zinc and barite. Barite is produced almost exclusively through artisanal mining. 90% of the production is artisanal and Morocco has in recent years once been ranked second globally in terms of production. ASM remains undercapitalized and lacks efficiency with most of the extraction done at surface levels. While the Government has granted general mining rights to the local population, it does not administer individual mining rights. The latter is in the hands of the respective local "Djemaa," or Council of Artisans, which sanction individual mining rights along procedures that vary among differentsub-regions.
The 1960 Dahir law reserved the exploitation of lead, zinc and barite to ASM in the Tafilalet and Figuig region. In 2014, the mining sector represented 10% of the GDP and 25% of exports. Artisanal miners are estimated to be around 5000 to 10000 in Morocco. The Southern Part of the country is attracting a growing number of gold artisanal miners mainly in the Akka, Tiouit and Boumadine regions.
The production of zinc and lead, compared to other minerals have a relatively high value on the market did not exceed 10,254 t and 2,332 t respectively in 2013. Lead used to be mined industrially by a French Large Scale Mining company employing 30 000 miners in the 1950s-1960s, however the sharp fall of lead prices brought a halt to the company’s activity paving the way for artisanal miners in the region.

TitleVII: Women and child labor; Article 21: Young miners of less than 16years and women cannot be employed in the pits.

II. Increase investment in the sector tenfold by 2015;

III. Double employment in the mining sector excluding phosphates by 2025 and surpass 30 000 direct jobs in mining;

For over 60 years the mining sector was overseen by the 1951 Mining code. The
Law No. 33-13 of July 2015 and its implementing decree of April 2016 gave birth to a new Code. The new mining code introduces new types of mining authorizations, increases the term of a mining license to ten years and now covers all mineral substances with the exception of phosphates (reserved for the State) and construction materials.
With the government’s focus being on expanding the mining sector in Morocco, the revision of The Dahir carrying the creation of the mining area of Tafilalet and Figuig lead to the opening of a previously exclusive ASM area of 60 000km² to the big investors.
The authorities in Morocco are now trying to increase activity in underdeveloped segments of mining such as silver mining which is expected to accelerate. Under the 2015-20 National Strategy for Mining Sector Development, the government aims to nearly triple the industry’s revenue. The sector’s strategy also seeks to modernise mining regulation, the new mining code has been passed with the aim of attracting foreign investment, increase capacity, and encourage upstream and downstream activities in a move towards diversification in strategic commodities.

In line with the desire to integrate the mining activities of the “Tafilalet and Figuig” zones into the mining development system a new strategy was presented in 2015 with the following objectives in regards to finance for ASM: provide investment from private investors to artisanal miners; through the (Centrale d’Achat et de Development de la region miniere du Tafilalet et du Figuig) CADETAF bring support to miners who are in partnership with investors; create a development fund for the “Tafilalet and Figuig” zones that will contribute to local development.

Extension services – a phased approach to integration and capacity-building

The Millennium Challenge Corporation, a US funded project in 2004 focused on modernizing and promoting artisanal industries in the Fes region including Zillige making (mosaic tilework made of clay materials). In an effort to diversify Morocco’s mineral base, authorities have called for consolidation within the ASM sector by encouraging miners to form partnerships with potential investors to improve working conditions.

Artisanal mining has been practiced for many years in Morocco, artisanal mining for barite, lead and zinc ores is legal within the CADETAF. Mined products are sold to the local collection centres which were equipped with chemical analysis, storage and weighing facilities. The government took steps to support ASM at the CADETAF by improving working conditions, productivity and safety.