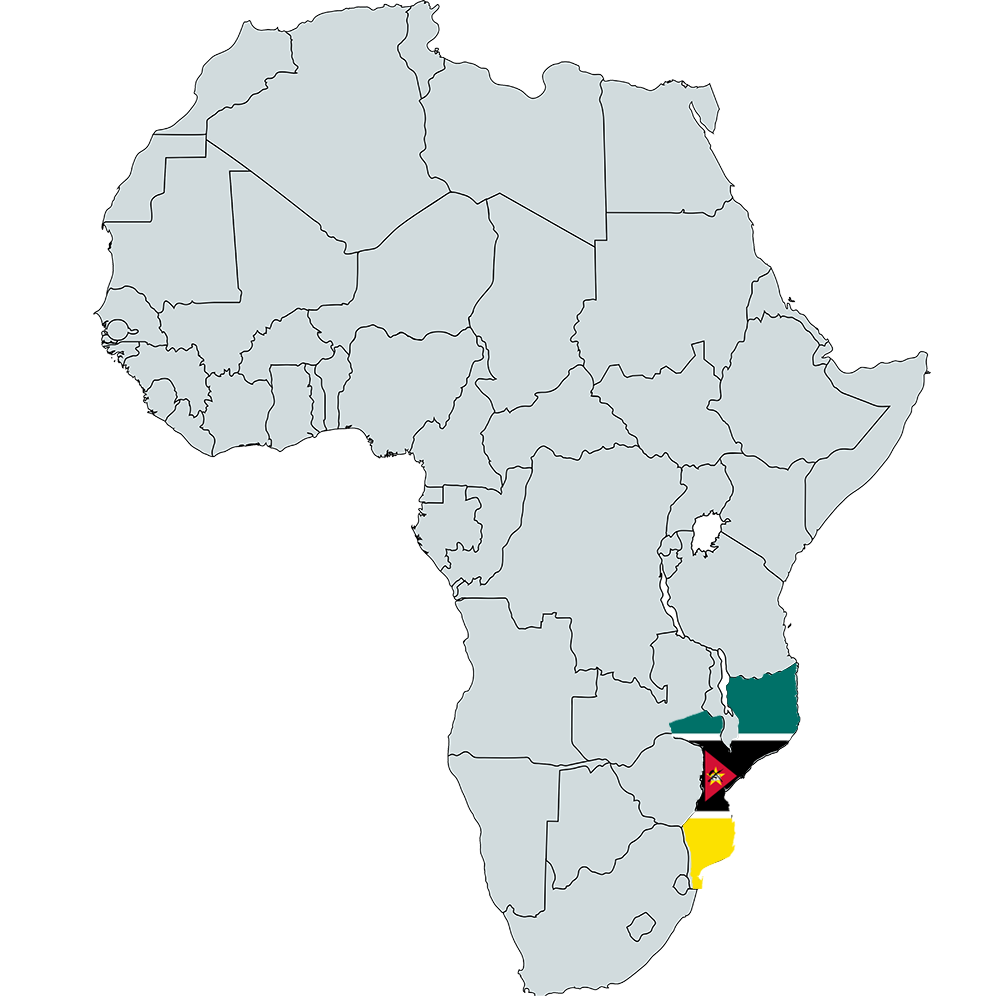 Mozambique is well endowed with mineral resources, their extractives sector is dominated by large scale operations through natural gas (120 million GJ/yr), coal and titanium products from heavy sands (a capacity of 800.000 tons/yr). Other resources include iron ore, gypsum and marble. For Mozambique, its natural resource capital represents over 40% of total wealth circa more than double the average in sub-Saharan Africa. Despite the country’s great natural resource wealth and strong economic growth, rural poverty remains high countrywide.

Gold mining has a long history in Mozambique dating back to over 1000years. However, there is no large scale gold mining in Mozambique and ASM is wide spread in the country and artisanal miners account for around 90% of Mozambique’s gold. It was particularly in central Mozambique that industrial mining did not encounter the same level of success while artisanal mining has expanded considerably. One third of the labour force is women and children and higher level of activity in ASM is observed during lower agricultural production. This displays evidence of livelihood diversification from miners. Gold production has grown to 197.00 Kg in 2014, up from 180.00 Kg from the previous year. The highest level of gold production was reached in 1942 at 2030.12 Kg.

ASM impacts negatively on Mozambique’s society, economy and mostly its environment. The sector is known for contributing to deforestation, wildfires and soil degradation. The Forest and Wildlife regulation (Decree 12/2002) mandates that 20% of tax revenues levied on the exploitation of natural recourses – timber, hunting, or tourism – is reverted to local communities. Despite its negative impacts the activity remains essential to artisanal miners mainly involved in mining gold, semiprecious and precious stones.

In 2016 Gems, precious metals represented about 3.2% of Mozambique’s exports. Montepuez Ruby Mine in Mozambique is the world's largest deposit of coloured gemstones, which is being powered by the ethical mining group Gemfields. Gemfields implements a transparent, legal mining process and is putting the Mozambican gemstones into the formal economy. Until the arrival of Gemfields in 2012 production was largely unlicensed and small scale.

I. UNIMA: Union of Artisanal Miners of Manica

Policy Objective: Bring the legislation on mining activity in line with the country’s current economic situation

I. The Government will safeguard national interests and share benefits among communities;

II. The Government will ensure greater competitiveness and transparency; and

III. The Government will preserve the environment, guarantee the protection of rights and define the obligations of mining rights holders.

The policy rests on four principles, namely: 1. Ownership, 2. Beneficiation, 3. Sustainability, 4. Environment. The Mozambican government takes the view that the efficient and transparent exploitation of mineral resources will boost the economy and contribute towards the eradication of poverty through revenues. Mozambique’s mining policy and strategy was designed to strategically adjust to today’s dynamic and growing activity of the mineral resources in the country, as well as to closely align with the tenets of the Africa Mining Vision (AMV)
Current legislation does not require the miners with mining license to belong to an association but they cannot mine outside of designated areas. Children are actively involved in artisanal gold mining. As a result, Mozambique’s government began drafting a list of occupations deemed hazardous for children, the end goal is to approve a plan to combat the worst instances of child labour exploitation.
The 2013 launch of the AMDC in Mozambique marked a new chapter in the country’s history and management of mineral wealth. For Mozambique this implies striving for a mining sector that is safe, gender and ethnically inclusive, environmental friendly and socially responsible.

Financing of ASM in Mozambique compared to other African countries received an array of attention from both the public and private sector. Recognising ASM’s poverty alleviation potential, the Mozambican government has undertaken measures to bring dynamism and to formalise the sector while mitigating its negative impacts. Measures taken have included: a legislative review in 2002, and the establishment of the Mining Development Fund (Fundo de Fomento Mineiro – FFM) tasked with promoting and assisting the ASM sector both technically and financially. The fund actively finances ASM and purchases gold from miners. In 2008, It was estimated that the FFM supported around 30 per cent of the ASM operators in the central part of the country. Mozambique also offers government loan facilities aimed at the ASM sector. Joint ventures arrangements are also successful with the example of ASM Munhene Association and a Venture Capital fund from South Africa which resulted in a 75:25 sharing of the production.

In Mozambique, value addition occurs at the very early stages, mainly in gemstone cutting. The Government established a Gemmological Institute aimed at promoting value addition and proper valuation of the Gemstones from ASM. However, the level of success of the initiative remains low. A tax reduction of 50% of the Mining Production Tax is allowed when the production of minerals is used by the local industry.
Recently, the government through the Department of Artisanal and Small Scale Mining’s created the Empresa Moçambicana de Exploração Mineira and the Instituto Geologico Mineiro. These efforts contributed to the creation of 95 designated ASM areas and 53 registered and active associations. The Mozambican government also facilitates geological exploration, evaluation of the potential for the exploitation of gold in an area belonging to the association and offers training to ASM miners.

Mozambique’s gold buying market is composed of licensed traders (approx. 250). The state-owned EMEM and the licensed miners are the only two legal gold buying outfits for ASM miners, but due to the informality/illegality of the sector, unlicensed gold buyers thrive.
Most of the Fairtrade or Fair mined certification goes to large scale mined gems though Gemfields from the Montepuez deposits. In view of the important revenue stream that is coloured gems, the Nampula provincial government announced the opening of a $50- million gem and other precious stones certification centre. Despite the role played by precious stones in Mozambique’s economy the country is not a participant or observer of the Kimberly Process. However, Mozambique alongside eight other countries takes part in the UNICRI initiative which is a mechanism for the traceability and certification of ethical origin of the coloured gemstones