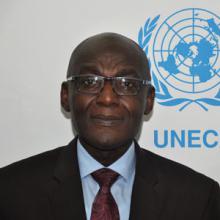 Joseph ATTA-MENSAH
United Nations Economic Commission for Africa, Addis Ababa
Principal Economic Policy Officer, MGD- Office of the Director
Joseph Atta-Mensah is a Principal Policy Adviser at the United Nations Economic Commission for Africa (UNECA). Joe responsibilities include ensuring that the key policy findings in ECA research are used to support policy implementation at national, sub-regional and continental levels. This is achieved by leading teams strengthening the capacity of African Union and its organs, including member States, the African Union Commission and the regional economic communities (RECs) in deepening and advancing the African Union's agenda of continental integration. He also works on issues of macroeconomics, monetary economics and economic models. Joe leads teams in providing policy advisory services to national, sub regional and regional institutions, and assist them in the formulation of strategies, programmes and projects on macroeconomics and monetary economics. Joe also worked with his colleagues on the regional coordination mechanism (RCM), which brings the UN together to support the African Union. Prior this position, Joe was the Director of the Office of Strategic Planning and Programme Management, where he supervised programme planning and policy coordination as well the monitoring and evaluation of ECA’s programme of work. Joe has also served as the Director of Regional Integration, Infrastructure and Trade at UNECA where he focused on research and analysis on regional integration, infrastructure and trade policy issues of the African continent. He has also advised governments, the Regional Economic Communities (RECs) and other stakeholders on matters pertaining to Regional Integration, Infrastructure, Trade and Macroeconomics Issues. Joe has represented UNECA at Summits of African Heads of State, meetings of African Ministers and other high-level conferences and meetings within and outside Africa. Before joining UNECA in July 2004, Joe worked as a Senior Economist at the Bank of Canada for 10 years. Joe holds a doctorate degree in Financial Economics from the Simon Fraser University in British Columbia, Canada and has a number of refereed scientific articles under his name. Atta-Mensah is Principal Policy Adviser of the Macroeconomic & Governance Division. His areas of expertise include economics and mathematics, with specific emphasis on credit markets and monetary policy. His recent publications focus on the economic transformation of Africa and on mathematic valuation of corruption, and commodity and infrastructure index bonds. Mr. Atta-Mensah holds a Ph.D. in The Valuation of Commodity Linked Bonds?from the Simon Fraser University, Burnaby, Canada.