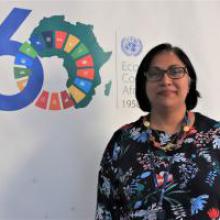 Bineswaree Bolaky
UNECA, Lusaka
Economic affairs officer, SRO-SA- Sub Regional Initiatives Section
Ms. Bineswaree (Aruna) Bolaky is an Economic Affairs Officer with the UN Economic Commission for Africa (UN ECA) Sub-regional office for Southern Africa, based in Lusaka, Zambia. Prior to that, she served in the Africa section and Least Developed Countries (LDC) section, of the Division for Africa, LDCs and Special Programmes at the United Nations Conference on Trade and Development (UNCTAD) in Geneva. She has been a co-author of the UNCTAD LDC Report and the Economic Development in Africa Report. She has worked in the United Nations for more than 16 years in the areas of economic research, policy analysis and programme management in several duty stations with ECLAC and UNDP. Prior to that she was an instructor/lecturer at university in the U.S and the People’s Republic of China, a consultant at the World Bank in Washington D.C., and a summer intern at the IMF. She holds advanced degrees in Economics and Economics of Competition Law from the University of Cambridge, UK; Simon Fraser University, Canada; King's College, London, U.K and the University of Maryland at College park, USA. Her areas of interest include trade and regional integration, SME and private sector development, South-South cooperation, and SIDS-related issues. She is a fellow of the Cambridge Commonwealth Society. She is fluent in English, French, Creole (native) and has limited proficiency in Spanish. She is a national of the island of Mauritius.

2008
Tourism Competitiveness in the Caribbean

2011
Regional Integration: A lever for positive tourism development in Africa?

Chapter 11 in Positive Tourism in Africa.

2018
The effectiveness of competition law in promoting economic development

2013
Operationalising the blue economy in Africa; the case of the South West Indian Oean

2020
Covid-19 and its implications for women

2020
COVID-19: Every crisis is a wake-up call for better preparedness

2020
Unlocking the potential of Africa’s services for structural transformation

2019
Digitalization, entrepreneurship and inclusiveness In Digital Trade in Africa: Implications for Inclusion and Human Rights

United Nations Economic Commission for Africa, Office of the High Commissioner for Human Rights and Friedrich-Ebert-Stiftung

2019
Tourism for Economic Development in Africa

Journal of Research in Business, Economics and Management (Vol 7, No.4)

2016
The impact of Covid-19 in Southern Africa: A case for leveraging the AfCFTA to diversify intra-African trade