Established in 1963, the IDEP Library has been at the forefront of providing quality information and documentation services to a large and diversified audience of trainees, research and teaching staff, visiting fellows, government officials, university academics, postgraduate students, and the general reading public. The library is home to the most original collection of development documents concerning postcolonial Africa. For example, most original copies of all the development plans elaborated by African countries since independence are available in the library. The library is also home to the biggest collection of dissertations produced by senior African development planners and policy analysts who have passed through the Institute’s master’s degree programme.

The IDEP Library plays a leading role in serving as a liaison centre for the UN and partner organizations. It has also served as a repository in Senegal for the World Bank and IMF publications. Besides, concerted efforts are made on a continuing basis to acquire and maintain core books and periodicals on IDEP’s major programme areas as well as leading economic management and development themes. More than 2,000 users visit the library each year, including 1,200 scholars and researchers. The ECA Library as a member of the UN libraries consortium, grants the IDEP Library access to numerous databases for in-house use. The institutional acquisition policy places emphasis on cooperation and networking with other libraries around the world.

The IDEP Library collection consists of books, journals, pamphlets, CD-ROM databases and publications from the UN System, the World Bank, the IMF and the OECD. Other resources include bibliographies and Internet-based on-line databases. Given IDEP’s mandate and mission, the library seeks to position itself as a premier centre of information and data resources. In this way, the library is able to play its role fully as a key resource for the attainment of IDEP’s institutional priorities.

In 2017, a digitization project was initiated and is currently run with 3,300 titles of publications available with a target of 5,800 at the end. The resources concerned by this project are the publications produced by African member states and the whole collection of IDEP published materials. 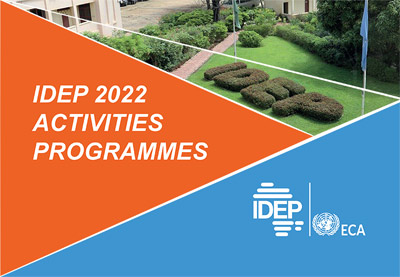