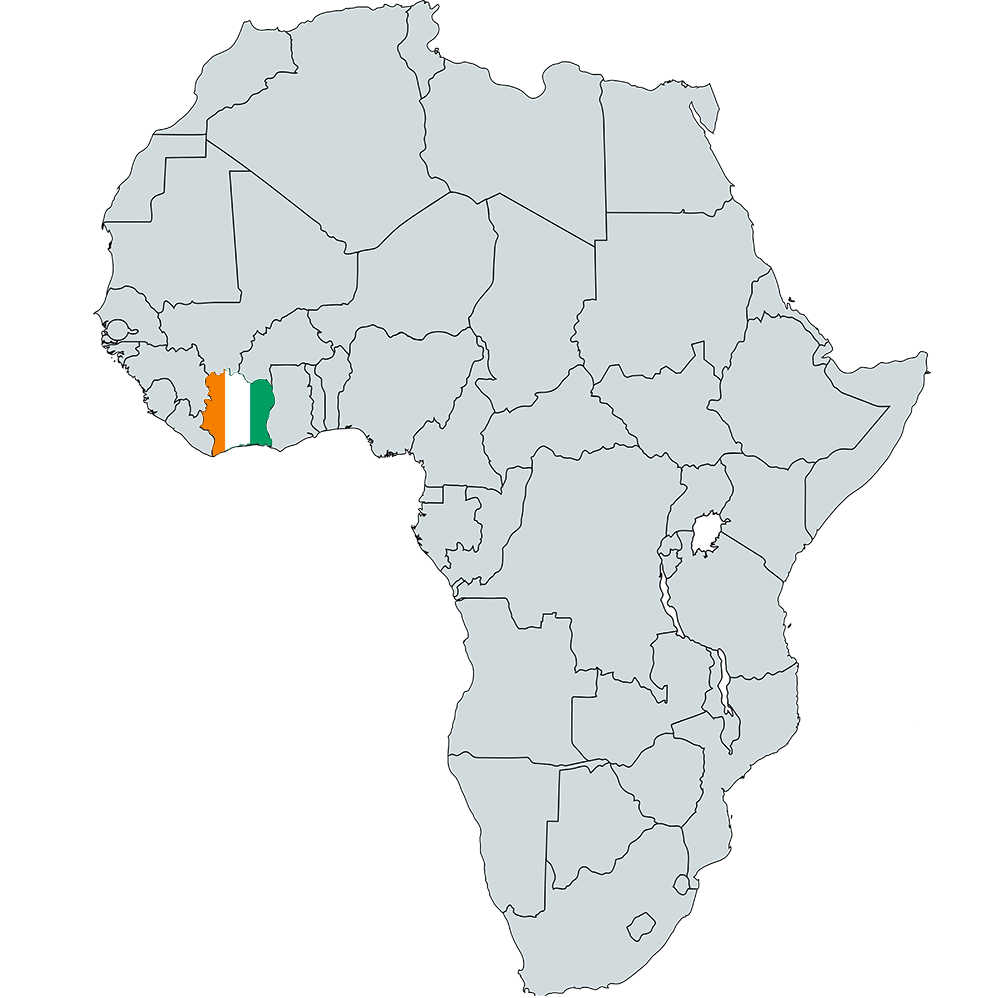 Traditionally known for cocoa production, Cote d’Ivoire’s other natural resources remain underdeveloped. The country’s main ASM products are gold, nickel, diamonds and coltan, other minerals such as manganese and silver are also produced. The mining sector in Cote d’Ivoire is dynamic and saw a 16.5% rise in revenue in 2016. Most of the gold is extracted from 4sites, in: Ity, Angovia, Bonikro and Tongon. Gold is the most exploited mineral in Cote d’Ivoire, its production reached 23,5 tons in 2015 but mining activities in the sector is dominated by large scale mining but this does not include industrial processing. Nonetheless there is a big potential for value addition through mineral processing and diversification.

Cote d’Ivoire is West Africa’s biggest GDP contributor accounting and according to the IMF (2017) has Africa’s fastest growing economy. The country holds one of the most favorable mining codes on the continent but despite the potential of ASM the industry has not beneficiated from any direct assistance and is considered a hindrance to the economy and over 400 artisanal sites were closed over the past years. In some regions ASM overlaps with agriculture where a reduction in cocoa plantations due to mining is recorded. The major regions targeted due to their informality were Bounkani and Gontougo.

Although dominated by gold, diamonds extraction receives keen interest through the integration of the Kimberly Process and several assistance programs for the artisanal diamond mining sector notably from the Diamond Development Initiative (DDI). Diamonds’ history in Cote d’Ivoire is more recent, they were first discovered in in 1928, but exploitation only began in the 1940s by the French company SAREMCI (Société Anonyme de Recherche et d’Exploitation Minières en Côte d’Ivoire) at its height production reached 150,000 to 175,000 carats per year (DDI, 2013). In 2016 the value of Cote d’Ivoire’s production was $961,992, amounting to $5,088,437.26 in exports (Kimberly Process, 2017). Legalisation of the activity created an influx of miners, due to this outpour of migrants the activity was outlawed in 1962. The Séguéla region and its community harboring the activity was the most affected by the UN Embargo and Séguéla’s real geological potential remains unknown. The decade of civil war and crisis left both gold and diamond mining communities in a dire state. ASM communities are already marginalized but women in particular face a “double” marginalization. Although in gold mining they represent half of the work-force, with diamond mining Ivorian women are inexistent, in the Séguéla region women are banned from mining.

No provisions for women in the 2014 Mining code,

the texts do not make any distinction on gender;

General provisions from the 2016 Constitution, Articles 35,36 and 37 offer economic opportunities for women:

these provisions impose on the State the duty to ensure that women are integrated into all aspects of the economy including in the extractive industry.

Promoting foreign investment and support in the mining sector

Make the mining sector a major economic growth engine given the importance of the geological and mining potential of Côte d'Ivoire.

I. The Government will improve governance in the mining sector;

II. The Government will provide support towards the intensification of production; and

III. The Government will ensure a diversification of mining production.

The socio-political crisis in Cote d'Ivoire divided the country into two parts: the southern part which is in the hands of the legal government and the northern part controlled by the ex-rebellion. As a result, the government lacks the capacity to provide security and enforce laws and policies over the entire territory.
The government in partnership with the UNDP (United Nations Development Programme) is working on a Program of Rationalization of ASM. The program is focusing on negative environmental impacts caused by ASM, namely deforestation, soil degradation, water pollution and usage of harmful chemicals. Cote d’Ivoire policy making environment remains hostile towards ASM only viewing it as nuisance not only to the economy but the environment.

Engagement of children in mining activities is prohibited by laws. Mining activities, particularly small-scale mining are prone to the use of child labour which causes social problems to children.

Specific governmental support for ASM is lacking, the only measure affecting the sector is from the 2014 Mining code on the establishment of a convention in the exploitation phase to guarantee the stability of the tax and customs regime during the production phase.

In light of the Action Plan for Re-organization of the ASM sector there is provision for training the miners and for dissemination of the new mining legislation. The Government will also train the mine owners and expect that these will train their employees. The training program will be organized in collaboration with other relevant ministries such as health, defence, interior, environment, etc. The Government will also implement Integrated Social assistance (e.g. promotion of alternative income generation activities) with direct engagement of the ECOWAS member states, as it is believed that more than 80% of the ASM come from these countries.
In 1986, the government created 24 village councils in the Séguéla area, known as Groupements Vocationels Cooperatifs (GVCs) to license and administer the artisanal diamond mines there. The Société pour le Developpement Minier en Cote d’Ivoire (SODEMI), a parastatal offshoot of the Ministry of Industry and Mines, demarcated the land earmarked for artisanal mining in each GVC into plots. However SODEMI retained control of the remaining land with an eye to the possible resumption of industrial mining.
A program of local content was also created under which holders of mining licenses must give priority to competent Ivorian companies, establish training programs for local companies and contribute to the development of the capacities of the mining administration.

The ban over Cote d’Ivoire diamonds was lifted in 2014, the country is now compliant with the Kimberly Process. Diamonds play a relatively minor role in the national economy of Côte d’Ivoire however receives more support in terms of marketing and aid. Since 2010 a World Bank sponsored project is providing technical support for legislative reform and training to local populations to strengthen negotiating skills vis-à- vis mining companies.
USAID and the EU will co-fund the Property Rights and Artisanal Diamond Development Program (PRADD) in Côte d’Ivoire, this is the only program specifically targeting Artisanal Small Scale Diamond Mining (ASDM). The program will run for a 5-year period with an estimate $1million yearly budget and aims at increasing the amount of diamonds entering the legal chain.